I was contacted by the owners of a cottage in the small village of Cragg Vale who had unfortunately suffered a flood in their kitchen which had resulted in damage to their Slate tiled kitchen floor. Cragg Vale is a very small village situated on the moors above Hebden Bridge in the borough of Calderdale. The cottages were originally built circa 1860 for workers at the local mill. Although the mill has now gone, the cottages are still lived in by people who enjoy living so close to the scenic Blackstone Edge Moors. 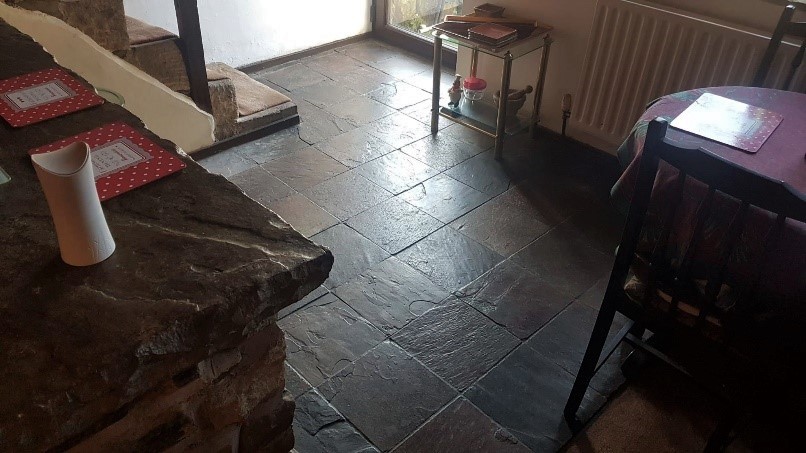 It’s difficult to appreciate the problems from the before photo but once I visited the property, I could see where some of the tiles had been damaged by the water leading to flaking and salting. The other major issue that became apparent was that the floor had also been covered in layers of sealant and varnish which had been applied over the years. This had left the overall finish looking a uniformly dark colour although it was very shiny.

After doing some tests and a full survey, I submitted a quote to carry out the work which was to be covered by the owner’s insurance. This was accepted and a date was set to begin the work.

Given the amount of work involved restoring the Slate, the complex nature of the job and the need to proceed quickly, I recruited the services of South Yorkshire Tile Doctor Matt Lovett. This is one of the benefits of using Tile Doctor as we can combine our skills and equipment to ensure that a job is carried out effectively and efficiently.

This job had the potential to become very messy so our first job on arrival to start work was to protect the kitchen units and adjacent carpets with protective coverings. We then applied a coating of Tile Doctor Remove & Go to small sections of the floor and left it to soak in for fifteen minutes at a time. The tiles were then scrubbed, and the resultant residue removed with a wet vacuum. The varnish proved particularly stubborn in places, so further applications of Remove & Go were scrubbed in using wire brushes to remove it layer by layer. The sealants and varnish turned to a muddy gloop that we continued to scrape up and remove with the wet vac. 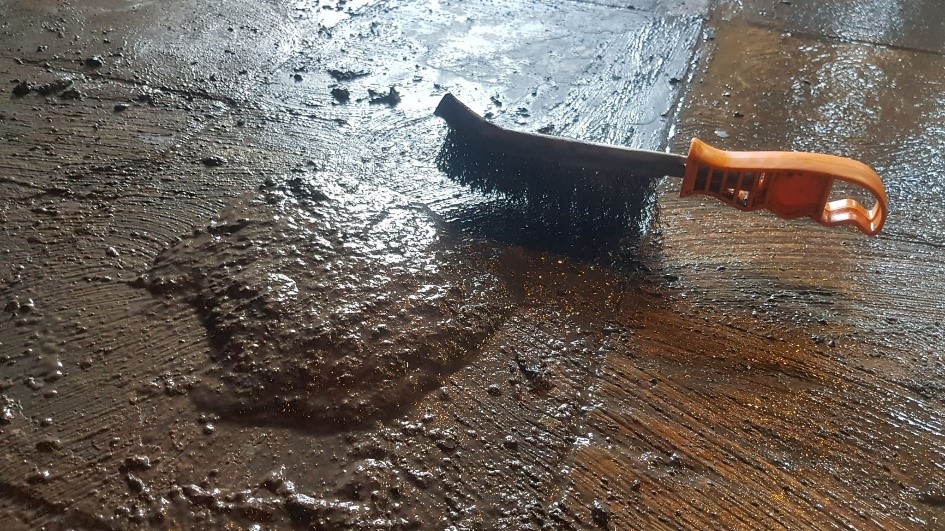 At the end of the first day we had removed about 80% of the coatings but knew that we still had long day ahead of us tomorrow.

The next day we reviewed our progress and decided to work in one metre square areas to remove the remaining coatings. This was a time consuming but necessary way to ensure that by the end of the day we had got the floor clean.

Before leaving the floor was rinsed again and dried as much as possible using the wet vacuum. After a final inspection we were happy the floor was ready for sealing and left it to dry off overnight.

First job on day three was to check that the floor was dry enough to begin sealing. This is a very important part of the process because if the floor is damp then the sealers won’t take properly. The floor was fine, so I started with the application of a single coat of Tile Doctor Colour Grow which is a breathable, colour enhancing sealer that penetrates the pores of the stone protecting it from within. Colour grow also enhances the natural colours in the stone thus highlighting its natural beauty. 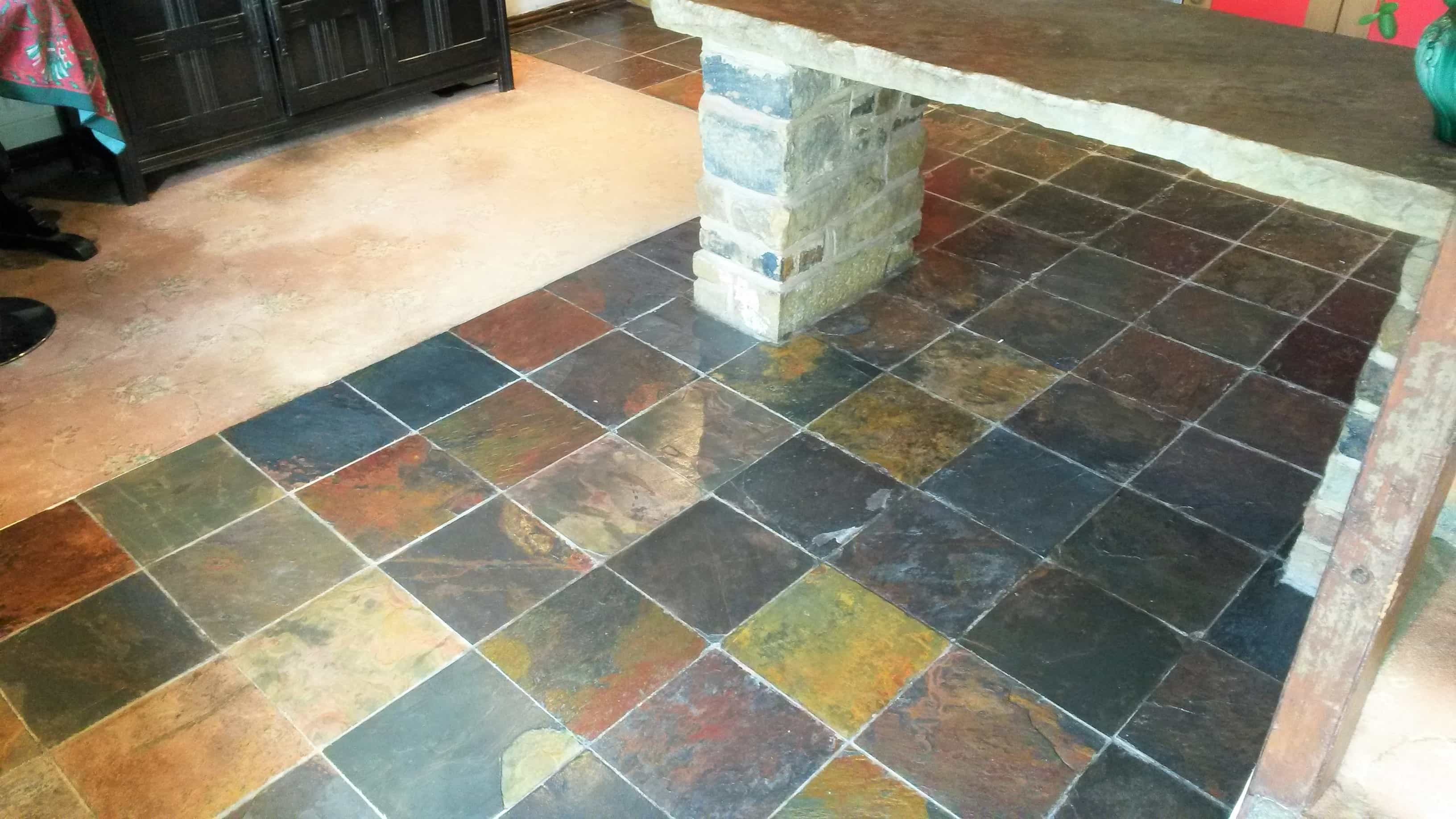 After 30 minutes, the floor was dry enough to start applying the first coat of Tile Doctor High Shine sealer. This is an acrylic sealant which as the name suggests, gives the floor a glossy shine. This was the effect that the Customer had requested at the beginning of the process.
A further four coats of High Shine were applied before a water test was conducted to ensure that the floor was completely sealed.

The Customer was very pleased and as you can see from the photos, it’s easy to see why. 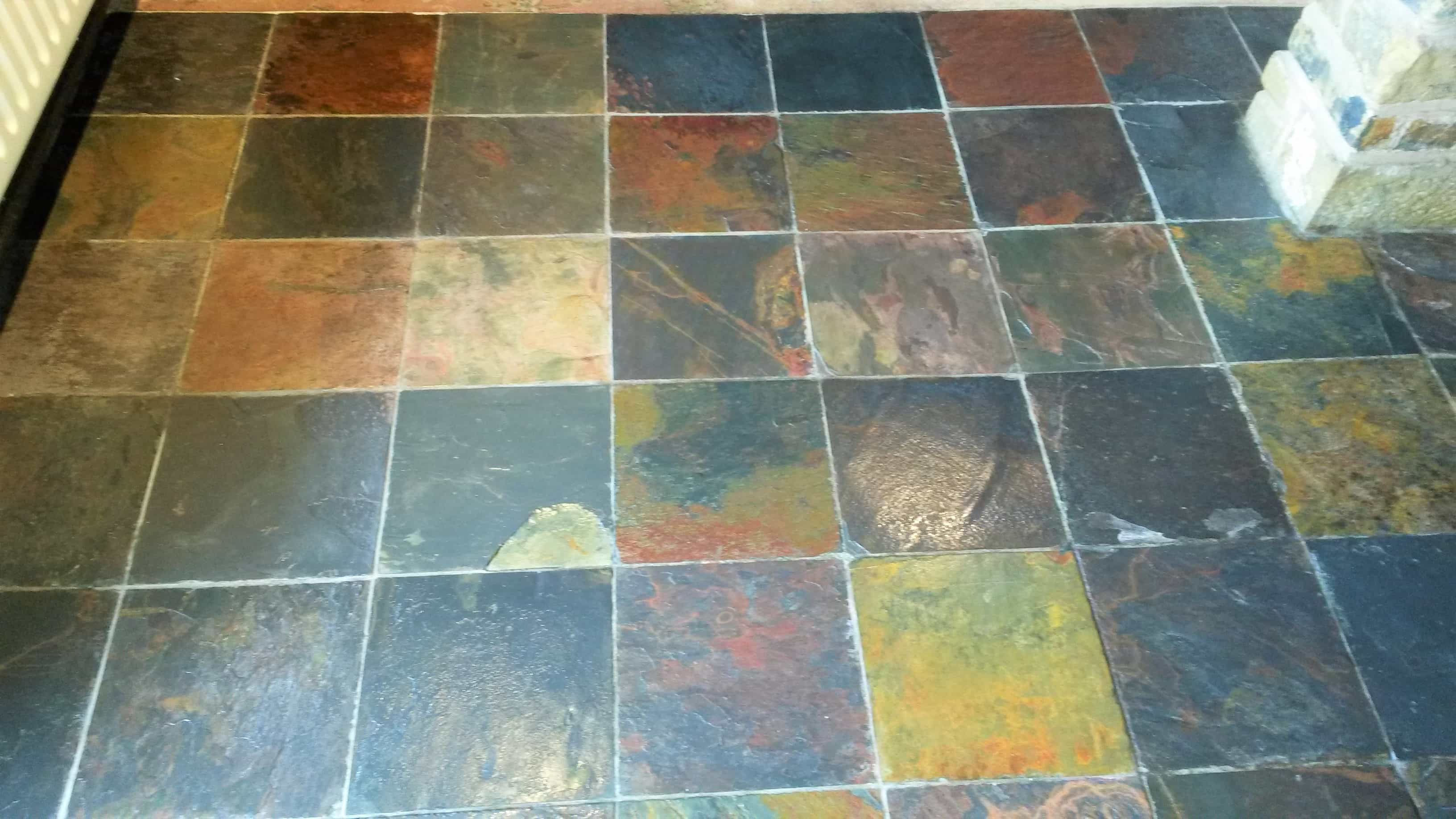 Details below of a slate floor we cleaned and sealed in the kitchen of a house in Ilkley, West Yorkshire. You can see from the photographs that the large Black Slate floor tiles were looking dull and the grout had become soiled with ingrained dirt.

To remove the remaining sealer and dirt from the Slate Floor Tiles I used a solution of Tile Doctor Remove & Go mixed 50/50 with Tile Doctor Nanotech Ultra-Clean agitated with a rotary scrubbing machine fitted with a scrubbing pad. The grout was particularly stained and given the scrubbing machine isn’t as effective on the grout lines it was necessary scrub in Tile Doctor Pro-Clean Tile and Grout cleaner into the grout lines by hand using a grout scrubbing brush. The floor was then washed down with water to neutralise it and remove any remaining cleaning solution prior to sealing, it had take all day to clean the floor so we decided to let it dry overnight and come back the next day to seal.

The Slate was sealed with several coats of Tile Doctor High Shine Sealer which provides a good combination of stain protection together with a high-sheen finish. Slate needs four to five coats and it’s necessary to let it dry between coats this step can take some time to complete. You can see the different in the photograph below; also notice how the sealer has given the floor a lift; the sealer will also protect the grout from further staining. 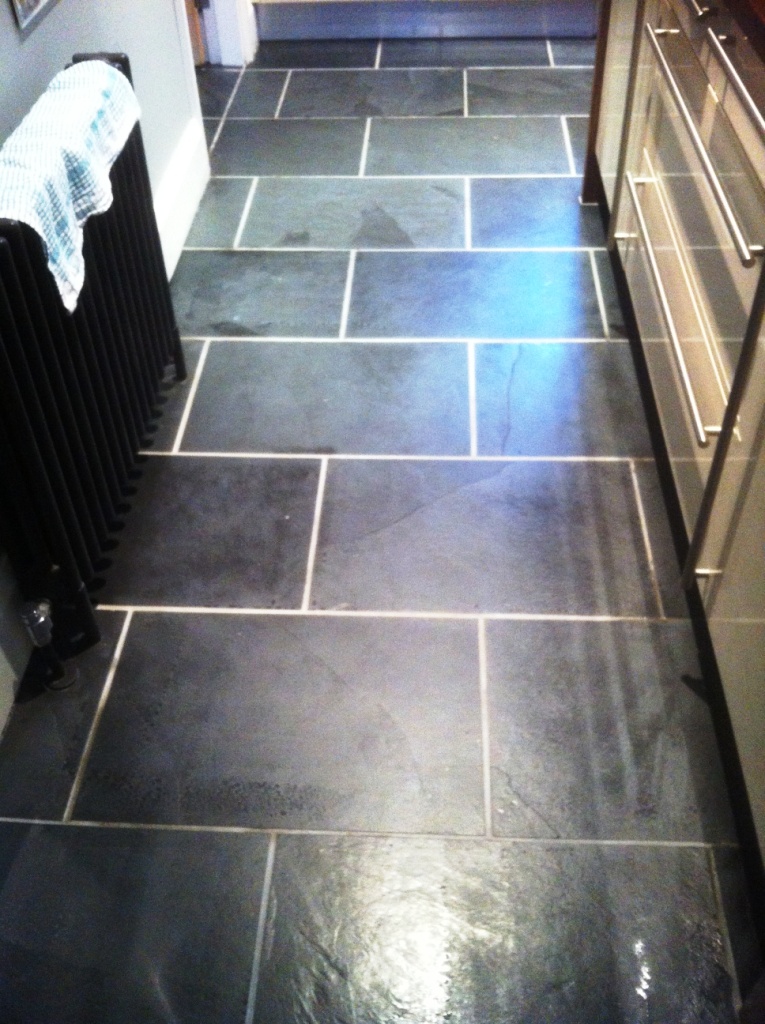 Details below of a dirty slate floor in the village of Linton near Wetherby. The large 60 x 40cm Slate tiles were laid in a kitchen with grey grout and covered and area of approximately 10-12sqm. 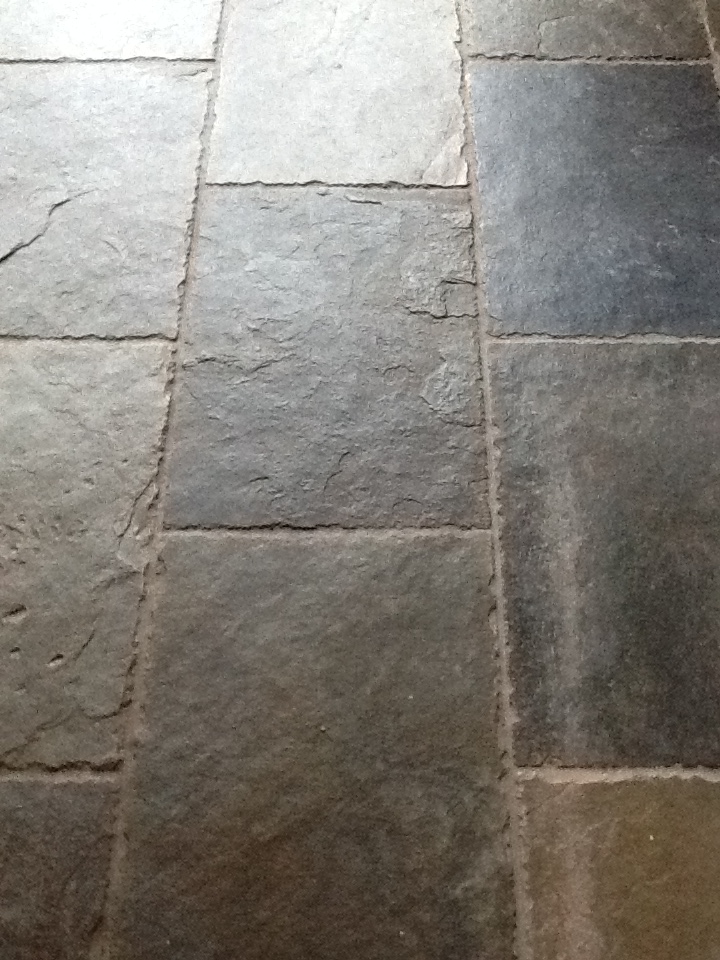 The dirt was removed from the Slate Floor Tiles using a solution of Tile Doctor Remove & Go mixed with Tile Doctor Nanotech Ultra-Clean agitated with a rotary scrubbing machine fitted with a scrubbing pad. The scrubbing machine isn’t as effective on the grout lines so it was necessary to scrub these by hand using a grout scrubbing brush. The floor was then washed down with water to neutralise it and remove any remaining cleaning solution prior to sealing, it had take all day to clean the floor so we decided to let it dry overnight and come back the next day to seal.

The Slate was sealed with Tile Doctor High Shine Sealer which as the name suggests provides a good combination of stain protection together with a high-sheen finish. If you’re doing this yourself I recommend the use of a paint pad which gives a nice even application, slate needs four to five coats and it’s necessary to let it dry between coats. You can see from the photograph below how the sealer really gave the floor a lift and the home owner was delighted with the results. 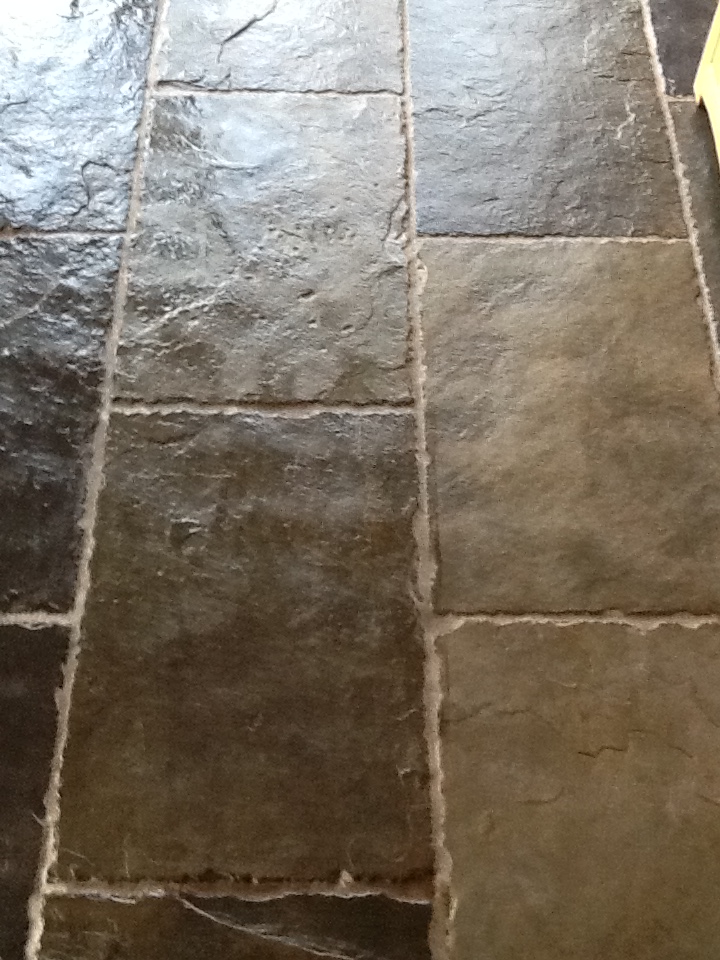 Jon was professional and friendly. He explained everything in detail so I knew exactly what to expect. He kept me informed throughout the process transforming my original flag floor back to how it would have looked when it was first laid. Top job, would highly recommend.
Beverley P, Halifax

Really professional, emailed and texted before appointments to confirm, which was amazing! Nice to have around the house, very tidy worker, and my floor looks fabulous! Thanks Jon
Louise G, Ilkley

Jon did a brilliant job bringing my floor tiles in my barbershop back to life, really happy with the end result. Would recommend to anyone who needs any professional cleaning. Very friendly and very quick with the work he carried out. 10/10
Mark , Leeds

Jon came to our house to assess the the flags, he was quick and clear with his opinion of how they would turn out after the treatment. His professional opinion was very precise. Jon worked hard and created a beautiful finish on our 400 year old flags, the price didn’t change either . Thank you Jon we love the work .
Alicia M, Halifax

Jon did a superb job on our flagstones. All done in a day, turned up on time and very responsive. Very understanding when we had to reschedule. Cannot recommend enough. Top job!
Rhys P, Ripponden

Lovely person very helpful and friendly and also professional. Nothing too much trouble. Would not hesitate to recommend him.
Elaine O, Bradford

Jon and his colleague spent a full day making the cellar quarry tiles as new. They were very polite and professional and the quality of the work produced was excellent. I am really pleased with the outcome and will have no difficulty in supplying Jon’s details to my friends should they require them.
Mrs D, Bradford